In the romance, which emerged in Germany in the late eighteenth century with the movement called Sturm und Drang, gave the idea of an art that emerges spontaneously from the individual, developing the notion of genius, art is the expression of the emotions of the artist - that begins to be mythologized. Authors like Novalis and Friedrich von Schlegel reflected on the art in Athenäum magazine, published by them, came the first manifestations of the autonomy of art, tied to nature. For them, the artwork found inside the artist and his own natural language.

Arthur Schopenhauer devoted the third book of The World as Will and Idea to the theory of art: art is a way to escape the state of man's own unhappiness. Identified knowledge with artistic creation, which is the deepest form of knowledge. Art is the reconciliation between will and conscience, between object and subject, achieving a state of contemplation, of joy. The aesthetic consciousness is a state of disinterested contemplation, where things are more profound in its purity. The art speaks the language of intuition, not the reflection, is complementary to philosophy, ethics and religion. Influenced by Eastern philosophy, said the man must be free of the will to live, the 'want', the source of dissatisfaction. Art is a way to get rid of will to go beyond the 'I'. 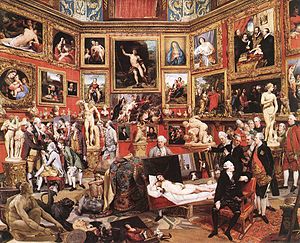 Richard Wagner picked up the ambivalence between the sensuous and spiritual in Schopenhauer: in Opera and Drama (1851), Wagner raised the idea of "total artwork" (Gesamtkunstwerk), which would make a synthesis of poetry, the word -- male element, with the music-female element. He believed that the language would be primitive vowel, while the consonant was a rationalizing element, thus the introduction of music in the word would be a return to primitive innocence of language.

In the late nineteenth century did the aestheticism, which was a reaction to utilitarianism prevailing at the time and ugliness and materialism of the industrial age. Against this, there emerged a trend that gave the art and beauty own autonomy, summarized in the formula of Théophile Gautier "art for art's sake" , even to speak of "aesthetic religion ". This position was intended to isolate the artist from society, seeking independently their own inspiration and letting himself be carried by only one individual's search for beauty. Hence, the beauty of any component away morality, becoming the ultimate goal of the artist who comes to live his own life as a work of art-as seen in the figure of the dandy -. One of the theorists of the movement was Walter Pater, which influenced the so-called decadent English, setting in their works that the artist must live life intensely, taking as the beauty ideal. For Pater, the art is "the magic circle of existence", a self-isolated world and placed at the service of pleasure, creating genuine metaphysics of beauty.