Representative of pragmatism, John Dewey, in Art as Experience (1934), defined art as the "culmination of nature," arguing that the basis of aesthetics is the sensory experience. Artistic activity is another consequence of the natural human activity, whose organizational form depends on the environmental conditions under which it operates. Thus, art is "expression", where ends and means merge into a pleasant experience. For Dewey, art, like any human activity involves initiative and creativity as well as an interaction between subject and object, between man and material conditions in which they operate. 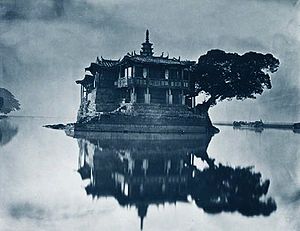 Pagoda Island at the mouth of the Min River (1870), for John Thomson. The photograph was a great revolution when designing the art in the nineteenth and twentieth centuries.


Jose Ortega y Gasset discussed in The Dehumanization of Art (1925) first grade art from the concept of "mass society" where the minority character of the avant-garde art produces a gentrification of the consuming public art. Ortega appreciates art a "dehumanization" due to loss of perspective, historical, ie not enough distance to analyze critically the socio-cultural substrate that carries avant-garde art. The loss of the realistic element, imitative, Ortega seen in the avant-garde art, is an elimination of the human element that was present in the art naturalist. Furthermore, this loss of human referents disappear ago it was based on classical art, assuming a rupture between art and audience, and generating a new way of understanding the art that only the initiated can understand. The dehumanized aesthetic perception of art is a new sensitivity based not on sentimental affinity as occurred with art romantic, but at some distance, an appreciation of nuance. This separation between art and humanity is an attempt to return the man to life, a relaxation of the concept of art as a secondary activity of the human experience.

At school, semiotics, Luigi Pareyson developed in Aesthetics. Formativity Theory (1954) an aesthetic hermeneutics, where art is interpretation of the truth. For Pareyson, art is "training", ie a way to express that 'while ago, invented a way to make ". In other words, not based on fixed rules, but defines it as the work is produced and projected on the time of the transaction. Thus, in the formativity the artwork is not a "result" but a "success", where the work has found the rule that specifically defined. The art is any activity which seeks an end without specific means for its realization must find creative and innovative process that produces results inventive originals. Pareyson influenced the school called Turin, which will develop the concept ontological of Art: Umberto Eco, in Opera aperta (1962), stated that the artwork exists only in his interpretation, at the opening of which can have multiple meanings for the viewer, Gianni Vattimo, in Poetry and ontology (1968) linked the art with being, and therefore with the truth, which is where the true art is displayed in a more pure and revealing.