One of the last lead of philosophy and art is the postmodern, socio-cultural theory that posits the current validity of a historical period that would have exceeded the project modern, ie the cultural roots, political and economic characteristic of the Modern Age marked culturally by the Enlightenment, politically by the French Revolution and economically by the Industrial Revolution. Faced with the proposals of the avant-garde, postmodern pose no new ideas or ethical or aesthetic, just reinterpret the reality that surrounds them, through the repetition of previous images, they lose their meaning. Repetition involves the context of art in art itself, it is assumed the failure of artistic commitment, the inability of art to transform everyday life. The postmodern art back to the substrate material unabashedly traditional, the work of art-object "art for art's sake" without pretending to make no revolution, no break. Some of its most important theorists have been Jacques Derrida and Michel Foucault. 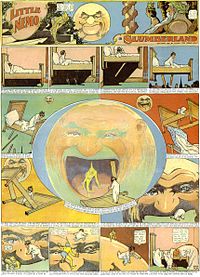 The comic has been one of the latest additions to the category of fine arts. Pictured Little Nemo in Slumberland, the first major comic book classic published in 1905.

In conclusion, one might say that the old formulas that relied on art to create beauty or the imitation of nature have become obsolete, and nowadays the quality art is a dynamic, constantly changing, also immersed in the media mass in consumer channels, looking often fleeting instant of perception, present with equal validity in the idea and the object in its conceptual origins and its physical implementation. Morris Weitz, representing the analytic aesthetics, believed in the role of theory in aesthetics (1957) that "it is impossible to establish any criteria of art that are necessary and sufficient, therefore, any theory of art is a logical impossibility, and not simply something that is difficult to obtain in practice. According to Weitz, an intrinsic quality of artistic creativity is to always produce new forms and objects, so that "the conditions of art can not be established in advance ever. Thus, "the basic assumption that art can be subject to any realistic definition is true or false."

Basically, the blurring of art lies in its reduction to certain categories, such as imitation, such as recreation, as an expression, "art is a global concept, which includes all these formulations and many more, an evolving concept and open to new interpretations, which can not be fixed in a conventional manner, but should bring together all attempts to express and formulate, being a broad and subjective synthesis of all.