General Principles of the Renaissance

The School of Athens, one of the scenes in the Vatican Rooms of Raphael (1512-1514) is a work that shows the relationship of the Renaissance with Humanism and Classicism. In an architectural environment inspired by the works of St. Peter's Basilica in which Raphael himself intervened, are portrayed, embodying the wise Greeks, many contemporary artists and architects.

The Renaissance architecture was fairly related to a vision of the world during that period held in two pillars: the classicism and humanism.

It is noteworthy that Renaissance ideals and values could not arise wholly unrelated to the medieval acquis that preceded it, however, the concepts behind this architectural style were built on the conscious and effective breakdown of the artistic production of the Middle Ages, in Special Gothic.

We analyze the following general characteristics:

The importance of perspective 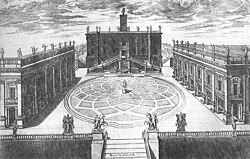 Piazza del Campidoglio in Rome, designed by Michelangelo, an example of perspective space.

An important in defining the spatiality of the Renaissance is the incorporation of the perspective as a tool for architectural design and the notion of design as a form of knowledge.

The main break with medieval space occurs at the time of the Renaissance architects spend on their buildings to design a development in which design rules are easily assimilated by the users. From an objective analysis of space, chaired by an empirical sense, reach conclusions that will dictate the pace of the building itself and its environment.

The mastery of classical language, to get these useful effects on buildings, makes possible the study of perspective. As a result, there arises an architecture embedded in a space perspective, fully grasped by the observer and whose proportional relationships are shown analytically and objectively.

These new spatial relations are especially evident when compared with the present space in the cathedral Gothic. In them, the architectural intent is that the observer, from the moment you enter the building, is dominated by space and instinctively raise his eyes to the top, thus providing an upward movement in search of the figure of God. In other words, all of this monumental Gothic space has a function, among others, that is having the will of the individual and determine their wishes, the role of stay and use of the building. Renaissance space, the intention is just the opposite: the building does not dominate the individual, but it reflects on its spatial and driving. He moved the concept of an architecture to fit a God to the measure of man. 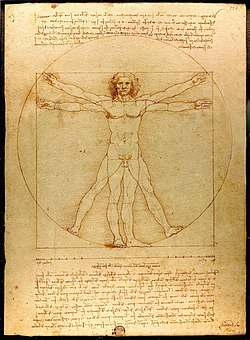 Leonardo da Vinci was one of the artists who were inspired by Vitruvius. This design, Vitruvian Man is the interpretation of Leonardo to the rules of proportion defined by Vitruvius in his Ten Books of Architecture.

The recovery of the ideals of classical architecture, introduced by Renaissance culture, must necessarily go beyond the mere observation of reality. The architecture produced by Renaissance artists, humanists in general, tried to maintain a scholarly and literary image, beyond the mere reproduction of the Greco-Roman ruins. The architects created always looking for an ideal model to the detriment of existing models (with many special ruins in Italy). These ideals or idealized models were processed and reflected in a theoretical, as the treaties give rise to classical architecture of the period.

Undoubtedly, the creation of the theoretical model, observation of the ruins was the predominant inspiration early Italian Renaissance architects, but evolved as the Renaissance, scholars, will systematically offer or recover the fees and technical works from classicism to write their own treatises on style, which although based on classicism, become effectively anti-classical.

It is notable for the formation of the Renaissance tratadística preservation of ten books of The Architecture of Roman architect Vitruvius, the first century BC, for the dissemination of basic ideas of canon and order. This was the only treaty which survived from the classical period following the fall of Rome, during the Middle Ages, having been copied and preserved in fragmentary form in general, in the libraries of the monasteries. So, as volumes were copied and translated, designs and drawings that made the treaties were lost, so its subject matter became over time confusing and sometimes contradictory. For this reason, much effort Renaissance writers would be content to recover the lost, reaching for its consummation to venture in any way patterns that existed in the original text.

The Vitruvian treated as the only major reference classical architectural theorist, and despite their lack of content, provided the basis for all major studies undertaken by the Renaissance. For example, a work clearly derived from the Vitruvian are the ten books of Leon Battista Alberti, known as In re aedificatoria.