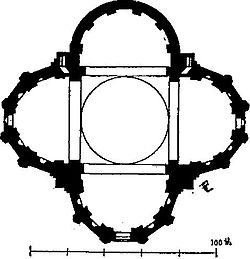 The Architectural Renaissance was developed from the fifteenth century mainly in Italy. It is common place to attribute the genesis of the city of Italian in Florence, a city where Gothic had hardly penetrated, at the time of the construction of the dome of the Cathedral of Santa Maria del Fiore designed by Filippo Brunelleschi. Such an episode is not only a mere stylistic change in the profile that predominated in the Florentine architectural setting, but the clear demonstration of the rupture that would come later in their own way of producing architecture, opening the way to not only rediscover the classicism, but also for promoting and tratadística unpublished theorizing on the subject. Many scholars who claim that Brunelleschi built, in fact, not just one dome, but the concept of a new kind of architect: alters the rules of construction beginning a process that gradually separates the designer to the builder.

One point that emerges in the production of Brunelleschi is manifested more importance in the field of construction in the style. It treats this when observing the work as a whole, perceiving that, despite wanting to continue the classical canonization, there is a building that is not fully committed to these classical rules. This is caused by lack of knowledge of the architect of the classic rules, which accessed more by the observation of existing Roman ruins in the study of treaties.

Furthermore, Brunelleschi began a tradition that separates the architect of the old medieval guilds and whose professionalism is increasingly evident at the time, asserting themselves as intellectuals away from the building itself. Many critics who analyze the phenomenon from a viewpoint Marxist identify here the time when the emerging bourgeoisie of the masses takes mastering the means of production (leaving power they will be able to build and design), thus enabling a process of exploitation of the proletariat by the capital, which will worsen during the Industrial Revolution.

Start the Renaissance Architecture: dome of the Cathedral of Santa Maria del Fiore.

The Cathedral of Santa Maria del Fiore was initially executed in style late-Romanesque, but its construction lasted for several generations (it was launched in 1296 and the death of Brunelleschi, in 1446, had not yet been completed). It was not a planned building: its design and construction were assembled in parallel. Although there was a general plan for its shape and internal layout, the construction details, as was common in medieval edifying practice, were being resolved as construction progressed in the work itself. Therefore, despite the need to build a dome over a particular point of the Church pre-existed, how it had been decided in advance. When it came time to erect, Florentine artisans were found with a span of 40 meters, impossible to cover with traditional building techniques.

The solution found in 1418, when the Republic of Florence and showed clear intentions to express their economic power in the architecture of the city so that the cathedral became, therefore, almost in a business card - was to promote a kind Design contest ideas for completing the temple, which involved, of course, the solution to the problem of the dome. Filippo Brunelleschi, who was at the time, a relatively known craftsman, accepted the challenge. Decided, will be traveling to Rome for inspiration. Rome in this period was the site of the world where the ruins of classical antiquity were more visible, almost integrated into the landscape. The main source of inspiration for Brunelleschi was the Pantheon: a structure with a diameter similar to that of Santa Maria dei Fiori, topped with a dome full arc. Brunelleschi not only noted the constructive solution used in the Pantheon, but began to study the relationships stylistic and formal proportion between the different elements making up that space. And it was indeed this attitude which made them hatched the spirit of the Renaissance: an individual observes a certain reality through desire and intention to interfere with that ancient reality to find useful solutions applicable to modern reality. Brunelleschi was not fully aware of the classical theory, but acknowledged a stylistic model you would use to build and develop its own architecture.

On his return to Florence, full of that experience with the classical world, Brunelleschi proposed a solution for the Florentine cathedral: a 42 meter dome topped with a lantern, based on their researches in Rome. But not merely reproduced the Roman model, but proposed a completely innovative: the dome would be the first drum octagonal in the history of architecture. This dome has an aesthetic function (beautiful but austere, without giving a feeling of heaviness), but also an ideological function: it represents Christian unity. For its construction, Brunelleschi used a set of double dome, one internal and one external, consisting of two layers built of brick with two threads separated by a transverse screw brick, they move in a spiral that makes it hard to set While a space configured as air chamber that gives lightness to the dome, while wire drawing directors and crowned with a lantern.