The Cinquecento: Overcoming of Classicism

Lobby of the Laurentian Library, Florence, Michelangelo (1525). It shows a fragment of the stair. 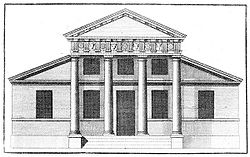 As the domain of the classical language evolved, grew in the Renaissance architects a sense of formal release of the corseted rules of classicism, so that any desire to excel (which always existed in varying degrees) be changed a fundamental element to be the result of the new production of these authors. This phenomenon, which was considered as an advertisement for the aesthetic movement that, years later, should take the Baroque, would gain strength especially in the early decades of the sixteenth century. The Cinquecento was a time when the intention to systematize the knowledge of the classical canons was fully overcome, through the treaties of Sebastiano Serlio and Jacopo Vignola. Thus, the compositional elements of classicism ceased to be used in buildings such as experimentation in search of the classic "but based on their awareness, in" search of innovation. "

At first, faithfully followed the classical rules of composition, but greatly expanding its scope. The classical rules were applied in particular in large public works, the great palaces and churches (the buildings considered "noble" deserving of the status of architecture in the classical view). Thus, new combinations of elements. Andrea Palladio was the leading exponent of this new way of working with the classical language, as is evident in his projects of "villas" in the vicinity of the Italian cities. Palladio's architecture was so unique and outstanding with respect to that of his predecessors that his method of work ended up creating a new style: the Palladianism. This style is characterized by the implementation of the central plant in residential projects (as in the villas) and a certain type of ornamentation of synthetic character (called surface architecture), among other grounds. Palladio himself authored a very comprehensive treatise on classical architecture, in which he outlined his thinking and perspective on this issue.

Mannerism: The great masters of the Renaissance and the end

Engraving of the modified plant by Vignola for Villa Farnese.

The Mannerism was the art movement occurred during the Cinquecento and whose training is conducted in the early decades of the sixteenth century and extends to early seventeenth century. Evidence of intention by the architects, humanists and artists of the period of art, but essentially followed the classicism, had a rather anti-classical content. In Mannerism therefore innovation develops constructive confrontation with classical architecture, already fully known.

Once spent tratadística the momentum of which endowed with a certain uniformity to the architecture by imposing certain rules, a new generation of architects, strongly individualistic, which is in fact a bridge between the Renaissance and the Baroque.

The architectural activity Michelangelo was the culmination and overcoming of the classicism of the mature phase or by Bramante, and can be described as classic in San Pedro or the Palazzo Farnese and more mannerist, for example in the famous staircase of the Laurentian Library) . Similar to what happened in painting or sculpture (which is clearer imitating her maniera), Italian architects of the mid-sixteenth century, some of whom left when the sack of Rome and distributed on the rest of the Italian cities , sought to challenge the classical canons. The main exponents of this new style were also of that Andrea Palladio and the heart of Venice, Giulio Romano (Palazzo del Te, Mantua, 1534), Bartolomeo Ammannati (Reform of the Pitti Palace, 1558-1570), Antonio Sangallo the Younger (Villa Farnese, Caprarola, 1559), Vasari (Uffizi Gallery, Florence, 1560-1581), or Jacopo Vignola with the Church of the Gesu (1568), is it in Rome, the seat and the model exported to the many Jesuit churches of the increasingly influential Company Jesus, whose facade is due to Giacomo della Porta (1578, which later inspired Carlo Maderno).

In his works, are constant references to classical compositional elements, but in a "deconstructed" and almost ironic. Converted into decorative patterns of windows should be placed on the outside, play with the effects of the optical illusion provided by the prospect, through unusually sized volumes, etc.. Similarly, taken to an extreme, had the extravagant gardens of the Villa de las Maravillas, Parco dei Mostri today (Bosco Sacro di Bomarzo) in Bomarzo in Lazio, by architect and garden designer Pirro Ligorio.

Deepening the specific characteristics of Mannerist buildings marked the germ of the birth of Baroque, if the surface is considered as a breach of the classical ideal proposed by the Renaissance really was the response to the depletion of the latter, already announced by Mannerism.