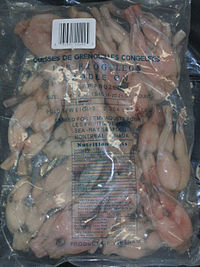 A leg bag from Vietnam.

The frogs and more particularly their thighs are consumed by humans, although edible frogs are not more than fifty species. Most are indeed toxic and some properties of hallucinogens. Frog legs are extremely popular in Europe, in Canada and the United States. In 1990, Europe imported around 6 000 tons of frog legs from Asia. According to the ministry of agriculture, the French consumed 3 500 tons of legs in 1994 or 8 000 tonnes or about 30 million frogs whose majority is imported. Between 1981 and 1984, the United States imported more than 3 000 tonnes per year of the frog is about 26 million frogs

Asia is the second contract major food of amphibians in the world, where the species is the most consumed Hoplobatrachus rugulosus In one year, over 6 million Hoplobatrachus rugulosus were exported from Thailand to Hong Kong. Presumably, these frogs are captured in their natural environment. Given the large number of frogs collected, this practice could soon lead to the destruction of remaining wild populations According to French customs statistics, about 6 400 tonnes of imported thighs 2002, 3 300 come from wildlife of Indonesia

Another species overexploited to meet the U.S. food market is Rana aurora draytonii ((in) California Red-Legged Frog, the frog California red-legged), located in western California. Although these frogs are currently under federal protection, reported to be endangered and that their capture is now prohibited, their population remains at risk due to other factors such as competition of invasive species introduced into their natural environment In addition, poaching may persist, the live frogs and wild worth more than the frogs breeding.

Since long, children will collect tadpoles in ponds and lakes nearby to raise their homes and observe the process of metamorphosis in which they become adults. However, breeding amphibians such as NAC has been popularized in recent years, and it is no longer the only child. Many amphibians are sold in the pet store, and some pay dearly for frogs colorful and bright with many specimens are taken directly from nature. In 2007, 16 species are listed on Annex I and 90 of Annex II of CITES Not scheduled at this time, the Goliath frog, the largest frog in the world, which is found, naturally, in some rivers insulated Cameroon and Equatorial Guinea in West Africa, is concerned by the overuse However, the main hazard associated with the detention of NAC is the spread of diseases to native species in release of exotic species.

The use of amphibians in medicine and pharmacology

Some Asian cultures amphibians an important place in their traditional therapies, some amphibians are considered to have curative or aphrodisiacs. The dissected oviducts of Rana Asiatic Grass and skin of some toads are two examples of current preparations sold in Chinese herbology. 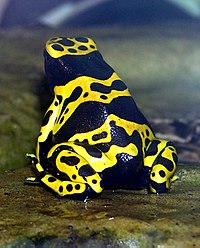 Many toads of the genus Bufo produce a toxin called butofenine properties with hallucinogens. There are also other toxins, such as 5-MeO-DMT (5-methoxy-dimethyltryptamine) produced by the Colorado River Toad ((en) Sonoran Desert Toad, Toad of the Sonoran Desert). Many toads are collected in their natural environment to extract toxins interesting. The extraction of these necessarily involves killing the toads, these practices have very negative effects on the maintenance of natural populations.

It is difficult to determine if, overall, the use of amphibians in terms therapy has adverse effects on natural populations.