The word "biodiversity" is a neologism composed from the words biology and diversity. 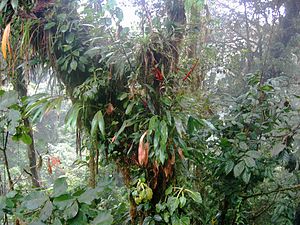 Various species epiphytes in a forest wetland in Central America. The ecosystems of the tropics home to most of the current global biodiversity.

At the Earth Summit in Rio (1992), under the auspices of the UN, through a global convention on biodiversity, all countries have decided to make a priority of protecting and restoring the diversity of life , considered a vital resource for sustainable development.

Then the EU summit in Gothenburg in 2001, the agreement on a sustainable Europe for a Better World was established (for Europe) a more stringent objective: stop the decline of biodiversity in Europe by 2010 (year World Biodiversity for UNO).

History of the concept of biodiversity

The term biological diversity was coined by Thomas Lovejoy in 1980 while the word biodiversity itself was coined by Walter G. Rosen in 1985 during the preparation of the National Forum on Biological Diversity, organized by the National Research Council in 1986, the word "biodiversity" appears for the first time in 1988 in a publication, when the entomologist U.S. EO Wilson makes the title of report this forum The word biodiversity was deemed more effective in terms of communication than biological diversity.

Since 1986, the term and concept are widely used among biologists, the ecologists, the environmentalists, leaders and citizens. The use of the term coincides with the awareness of the extinction of species during the last decades of the twentieth century.

In June 1992, the global summit in Rio de Janeiro marked the entry into force on the international concerns and desires vis-à-vis the diversity of life. During the Convention on Biological Diversity held June 5, 1992, biodiversity has been defined as:
"The variability among living organisms from all sources including, inter alia, terrestrial, marine and other aquatic ecosystems and the ecological complexes of which they are part: this includes diversity within species, between species and of ecosystems. "