The monarch butterfly (Danaus plexippus) is found in America, in Australia, in New Zealand, in New Guinea and the Canary Islands and is distinguished by its orange and black wings. We can meet exceptionally in Britain or Europe mainland.

This butterfly migrates in groups of millions of people over thousands of miles twice a year: August to October, it migrates to the south (especially Mexico) to move north in spring, a feat we know never achieved by any other insect.

It is a colorful butterfly, both larval (caterpillar) at adult stage (Imago). These colors are supposed to be a signal to potential predators. He went to toxic effects, consuming stage larva the milkweed, one of its two host plants that is toxic. The caterpillar and the butterfly it will be toxic, and therefore unaffected by birds and some other predators. Wingspan: 100 mm. Flight period: April to October in several generations. Host plants: Asclepias curassavica, Asclepias syriaca. Weight: 0.5 grams. Food: nectar of flowers 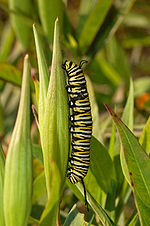 It has no protection status in Quebec, but is held in position "concern" by Canada.
Industrial agriculture and the general pollution of the environment with pesticides, but especially the use of herbicides to eliminate or drastically reduce that milkweed breeding areas and / or cultivated are some causes of its decline.

The deforestation, soil erosion is also threatening the forests of Michoacan in Mexico where the monarch was accustomed to winter.

In addition, GM-type "Bt" it is fatal However it is important to note that this study was based on laboratory tests. It has been strongly questioned after field trials

As an iconic species, it has specific programs and a strategic plan to protect the north (protection of habitats of milkweed, awareness invited to follow the migration and south (with including the promotion of ecotourism in the vicinity of local spawning.

This butterfly migrates from Canada and southern California to Mexico where he breeds each year on some woodland trees. There is this number so important in reproduction that can not even distinguish the slightest bit of bark.

After being seduced and attracted by pheromones emitted by the sexual female, the male mates, and dies after mating while the female will die after the hatching of eggs. Only months later did the young butterflies will make the reverse migration and return, as their parents, to mate.

In the Caribbean we find the subspecies Danaus plexippus Tobagi who is sedentary.