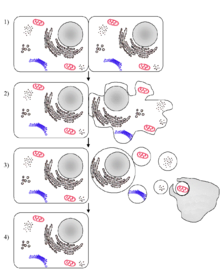 In living beings, there is a continuous death of cells, which are replaced by others. The balance between cell division and cell death causes the cell number remains relatively constant in adults. The cells may die in two ways: either by necrosis or apoptosis. Unlike necrosis, which is often the result of illness or trauma, apoptosis (or programmed cell death ) is a normal function of cells. The body must rid itself of millions of dead or dying cells every day, and phagocytes have a crucial role in this process, removing the remains.

Dying cells found at the final stage of apoptosis have molecules on their surface that attract phagocytes, such as phosphatidylserine . Phosphatidylserine is normally found on the surface cytosol of the cell membrane , but during apoptosis makes a move that places it in the outside, this process is catalyzed by a hypothetical protein called escramblasa . These lipid signal the cell as a target for the cells with appropriate receptors, such as macrophages . The removal of dying cells by phagocytes occurs in an orderly manner without causing an inflammatory response , and is therefore a key function of these cells.

Interaction with other cells

Phagocytes are not in a body specifically, but move through the body, interacting with other cells (phagocytes or not) of the immune system. Can communicate with other cells produce chemicals called cytokines , which attract other phagocytes to the site of infection or stimulate the lymphocytes are not activated. The phagocytes are part of the innate immune system of all animals, including humans. Innate immunity is very efficient, but not specific, since it does not discriminate between different types of invaders. The adaptive immune system depends on the lymphocytes, which are not phagocytes, but they produce protective proteins called antibodies , which mark the invaders for destruction and prevent the virus from infecting cells. Phagocytes, in particular dendritic cells and macrophages, stimulate the production of antibodies by lymphocytes through a process called presenting antigen .

Antigen presentation is a process in which phagocytes redirect some parts of phagocytosed material to the cell surface and the "present" to other immune system cells. There are two antigen-presenting cells 'professional' macrophages and dendritic cells. Following his inclusion in the phagocyte, proteins do not own (the antigens ) are degraded into peptides within dendritic cells and macrophages. These peptides bind to glycoproteins of the major histocompatibility complex (MHC) of the cell, which expose the surface of phagocytes, where they can be "presented" to the lymphocytes. The mature macrophages do not stray too far from site of infection, but dendritic cells can reach lymph nodes , where millions of cells. This improves immunity, since there lymphocytes respond to antigens presented by dendritic cells as they do on site the original infection. However, dendritic cells always collaborate with lymphocytes, and can destroy them if necessary, to protect the body. This occurs in a process called tolerance.

Dendritic cells also promote immune tolerance, that prevents the body from attacking itself. The first type of tolerance is central tolerance : when T cells leave the thymus for the first time, dendritic cells destroy antigen-bearing T lymphocytes that could cause the immune system itself is damaged (ie, that it confused "own" with "alien"). The second type of immune tolerance is peripheral tolerance . Some T cells carry antigens are molecules that attack "own" dodge the first process of tolerance, some T cells develop antigens that attack the 'self', below, and some antigens that attack the "self" are not the thymus, which is why, dendritic cells limit the activity of T lymphocytes that attack the "proper" outside the thymus, this is either destroying or seeking the help of regulatory T cells to clear the activities of lymphocytes T pernicious. When the immune tolerance failure may occur autoimmune diseases . On the other hand, excessive clearance allows infections, and in some cases of infection with HIV , may be obscured.