The crisis in the debt ceiling (also known as the expenditure ceiling) of the United States in 2011 relates to the debate in Congress over whether the U.S. should increase the debt ceiling, and if so, how much. It also discusses what the cost policies in the future, or fiscal policies will be necessary to apply after increasing the debt ceiling. Moreover, it is hoped that this discussion comes to important structural reforms to the budgeting process (for example, spending limits or amendments to the Constitution in relation to balanced budgets). The total national debt amounted to 14.4 trillion (trillion in Anglo-Saxon nomenclature) in July 2011, exceeding the spending cap of 14.3 trillion. The Treasury Department has no authority to U.S. to issue or incur debt beyond this limit is forcing change and reform.

Despite the lack of authority of Congress, December 16th of 2009 the debt ceiling was exceeded and to overcome the problem the Treasury has already had to use "extraordinary accounting tools" to give the Treasury $150 billion dollars to comply with federal obligations. In contrast to December 2009, in this case the situation is considered a potential crisis because the government could be seen unable to meet its financial obligations. The crisis only affect America, but threats on other countries whose currency is based on U.S. dollars and could be dragged by losses. The certification credit Standard & Poor's subjected the note of the national debt in a " negative review "during the crisis, increasing the risk of degrading the note" AAA "national debt. In this sense, the credit rating agency Standard & Poor's, on Friday, August 5, 2011 would lower the rating for debt of the United States of America of "AAA" to "AA +" for the first time in its history.

The debate has been unusually complicated, with lawmakers Republicans oppose any tax increase and the Democrats advocating a tax increase that was so necessary as a cut in expenditures. Lawmakers who support the movement Tea Party prompted the Republicans to reject any agreement that would cause immediate and long cuts incorporate or make any constitutional amendment.

The immediate crisis is over when a complex agreement between the parties has managed to raise the spending ceiling on July 31. After its approval in Congress and Senate, was ratified by President Barack Obama as the Budget Control Act of 2011, the August 2 deadline for the agreement.

What is the debt ceiling?

If the Treasury is unable to collect enough money to pay for the federal government, this may be authorized by Congress to borrow, i.e. to borrow money to pay the federal budget deficit. Before 1917, Congress authorized the Treasury whenever he needed to borrow money, but after the First World War when Congress created the position of "debt ceiling". Since then the Treasury can borrow the amount needed until a spending ceiling, a fixed amount (subject to certain limited exceptions). To change the maximum amount of debt the Treasury has to ask Congress to change legislation and the President must be ratified and become law. 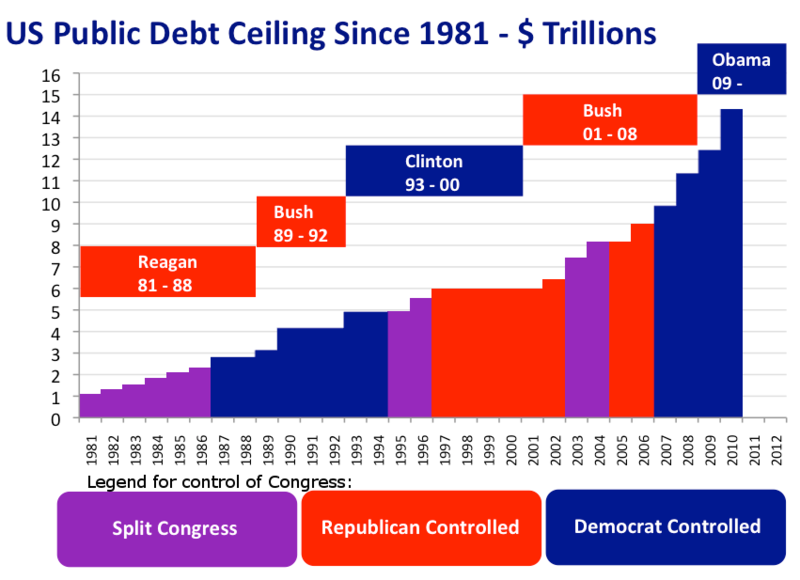 The process of adjusting the debt ceiling is separate and distinct from the conventional processes of government funding, and increase the debt ceiling does not necessarily imply an increase or decrease the budget deficit. The U.S. government approves a federal budget each year. This budget details the expected tax revenues, and therefore believes the amount of money that will need to ask in that fiscal year. That's why a vote to increase the debt ceiling is therefore generally seen as a formality required to continue spending previously approved by Congress and the President. The Government Accountability Office (Government Accountability Office) states:

The debt ceiling does not control or limit the ability of the federal government to run deficits or contract obligations.  Rather, it is a capacity limit for payment of obligations already incurred  The apparent redundancy of the debt ceiling has been suggested that it should be abolished altogether.

The United States has had public debt since its inception. The debts arose during the War of American Independence and already in the first Articles of Confederation are reports on the outcome of the debt ($ 75,463,476.52 on January 1, 1791). All presidents since Harry Truman have increased the total amount of U.S. debt. The debt ceiling has been increased 74 times since March 1962, including 18 times since Ronald Reagan, eight times with Bill Clinton, seven times with George W. Bush and three times (until August 2011) with Barack Obama .

In May 2011, approximately 40 percent of U.S. government spending was based on borrowed money. Increasing the debt ceiling allowed the federal government to continue borrowing money to maintain spending levels. If the debt ceiling is not increased, the federal government would have to immediately cut the cost of this 40 percent, seriously affecting the daily operations of government. In this case the Treasury Department had determined what tools they had had to use. Furthermore, if the United States could not take care of your debts have gone into bankruptcy , which would have catastrophic consequences for the country and also for other power-dependent U.S. economy and holding debts important to American power.

According to the Treasury Department,

"If we fail to increase the debt ceiling ... cause the government would go into receivership and could not meet its legal obligations, which would be an unprecedented event in American history"

These legal obligations include the payment of Social Security and medical costs, military wages, interest on debt and many other items. If the debt ceiling is not raised, then the Treasury should prioritize concepts which would be the priority that can not be declared abandoned and partially into receivership.