Following the death, on May 25, 2020, of George Floyd, a 46-year-old African-American, protests and then large-scale riots took place in the United States and around the world.

The day after the broadcast of a partial video of his arrest, several thousand people demanding justice gathered in Minneapolis to the cry of "Black Lives Matter", the name of a political movement that appeared in 2013. The demonstrators call for the police "stop killing blacks" .

The protests after George Floyd death against the racism and police violence spread rapidly in all 50 states of the United States affecting more than 2500 cities and villages, and then, from May 31, 2020, in the rest of the world. They sometimes turn into riots, arson, vandalism, clashes with police and looting. 32 people are killed in the context of demonstrations and riots. 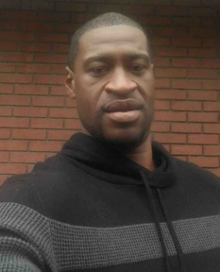 Police violence in the United States

The frequent cases of police violence and the deadly use of force by law enforcement officials led the African-American Civil Rights Movement to protest against the lack of police accountability during deadly incidents. The riots in Watts in 1965, are a notable response to violence against the movement African-American civil rights. In 1992, an amateur video where we see several policemen to beat for several minutes the angelino African-American Rodney King toured the world and is the trigger of a week of rioting.

During the 2010s, several cases of fatal police violence targeting African Americans received high media coverage. When in 2013, neighbourhood overseer George Zimmerman, who shot Trayvon Martin, 17, in the stomach, was found not guilty, an African-American anti-racist movement emerged, Black Lives Matter. It amplified the following year, in reaction to the deaths of Michael Brown, Eric Garner and Laquan McDonald, killed by white police. Over the next few years, it brought to light many other cases, such as those concerning Freddie Gray in 2015 and Philando Castile in 2016.

According to researcher Jesse Jannetta, a specialist in justice and police issues, police violence in the United States results in particular from "the latitude of the police to use force, from a legal point of view, with in particular the notion of "qualified immunity” [which prevents police officers from being prosecuted for discretionary actions in the performance of their duties]. The courts have thus found it very difficult to prosecute police officers implicated in the deaths of citizens.

The United Nations High Commissioner for Human Rights has stressed that impunity remains the norm among the American police. According to the organization, “the American authorities must take serious measures to put an end to these murders and ensure that justice is done when they occur”, calling for the establishment of a “prevention system”.

The protests following George Floyd death are taking place during the Covid-19 pandemic. At the start of the protests, May 26, 2020, the state of Minnesota had 21,960 cases and 899 deaths. Exceptional measures are being taken by the government of Minnesota to limit the extent of the coronavirus pandemic. At the national level, the threshold of 100,000 deaths was crossed at the end of May.

The pandemic has highlighted social inequalities in the United States. People from poor neighbourhoods have a death rate three to five times higher than residents of wealthy neighbourhoods according to official data. The latter do not include the deaths of people, often from minorities, who did not want to declare themselves as sick due to lack of health coverage, report several observer organizations. However, African Americans are often the most disadvantaged minority in many states, and in poor health relative to other populations, which would contribute to their over-representation in the statistics of deaths caused by Covid-19; For example, in mid-April 2020, blacks accounted for 40% of deaths from Covid-19 in the Illinois when they were only 15% of the population of that State.

More generally, and beyond the only pandemic, a study on postoperative infant mortality published in 2020 is revealing showing that African-American children are a little more exposed to medical complications (13.8% in of white children and 16.9% of black children; deaths very rare but 3.5 times higher in black children: 0.07% vs. 0.02% in white children). The potential causes discussed in this study are both medical and socio-economic: higher propensity of African Americans to develop complications; comorbidities; communication problems with the medical profession; conscious or unconscious racism of doctors (especially for the recognition of pain); poverty and limited access to quality care or facilities

On May 25, 2020 George Floyd, a 46-year-old African-American man, is handcuffed and arrested following the intervention of a police team. He is suspected of having used a counterfeit twenty dollar bill. For nine minutes, George Floyd is pinned to the ground on his stomach, the police officer Derek Chauvin holding him in particular with one knee on the back of his neck. Despite the arrests of passers-by and human protests on the ground, he finally lost consciousness and was pronounced dead less than an hour later at the Hennepin County Medical Center.

A video of the arrest caused a great stir in the country and demonstrations were organized from May 26 onwards.