In developed countries, asthma get more attention soon, because the number of people with asthma has increased significantly since 1950. Meanwhile, this increase is stabilized and there appears a tendency to drop used to be. Yet is it right that in the big cities one in six children has asthma.

In a proportion of people with asthma (about 10%) plays prolonged exposure to small particles during a work role. This is called occupational asthma.

Most people with asthma are allergic (70 to 80%). For them, the allergic asthma triggered by stimuli that they breathe. The reaction that follows is via antibodies of the IgE type. In 20-30% of the cases, no underlying allergic reaction and is called "intrinsic asthma". There is a link between asthma and obesity.

The hygiene theory suggests that the immune system in the western population is not hygienic enough exposed to allergens. It was for this reason target innocent body chemicals or pollen etc. This theory had not only the genetic component one possible explanation could be that asthma occurs more in certain families.

Asthma is a chronic disease of the airways, which is associated with an increased excitability and a narrowing of the airways. Complaints arise when people inhale irritants. These substances provoke them tightness, coughing or wheezing out.

Examples of these substances are:

Inhalation (breathing) of allergens, including:


Other things that can cause symptoms:

To diagnose the lung function measured with a spirometer. Often a reversibility performed. It examines whether the narrowing of the airways with drugs is to eliminate. In a pulmonary function reversibility is determined before and after administration of a bronchodilator. If someone after inhaling a bronchodilator blows a much higher value than before, it likely has asthma. To determine whether there is an allergy, a skin test or RAST test done.

In a skin test, the potential allergic substances in the skin. If one is allergic to dust, there is a swelling. With a (RAST test), the blood is tested for specific allergens. This test can be done already in infants. With one provocation test examined the response of the airways to non-allergic stimuli from outside. Several solutions are inhaled histamine in increasing strength. By measuring lung function before and after stimulation with these substances, the reaction of the airways in these substances.

Other resources can complement the treatment of asthma, such as anti-allergy, an annual flu vaccination against viral infections and antibiotics for a respiratory infection caused by bacteria. 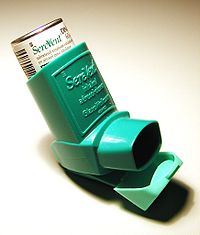 For people with asthma is as important for everyone not to smoke / passive smoking to avoid, enough to move and exercise and healthy to eat.