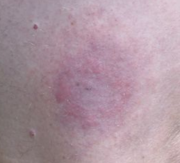 The disease has various forms and develops in three stages (see full article on the Lyme Disease) and can affect various organs and body systems, with a varying range of symptoms, not systematic: all patients do not all symptoms. And many of these symptoms are not specific to Lyme disease and can appear in other diseases. Moreover, because of poorly understood factors (virulence of the bacteria, the patient's immunity, coinfection ..), the time between the bite and the incubation period of onset of symptoms varies. This period is most often 1 to 2 weeks, but it is sometimes shortened to a few tens of hours, or otherwise extended to several months or years. The disease is often asymptomatic (without obvious symptoms), asymptomatic infections were detected in almost 7% of those infected in the United States but the rate of infection without symptoms may be much higher in Europe . 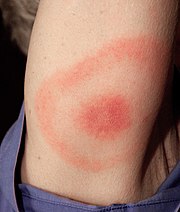 Typical erythema migrans, but is present in this form than double in less than 10% of patients

There are risks of misdiagnosis because of the wide variety of symptoms, Lyme disease can lead to many misdiagnoses such as multiple sclerosis, the lupus, the rheumatoid arthritis, the fibromyalgia, the chronic fatigue, the depression, the Alzheimer's disease, the Parkinson's disease, the autism and many others. In 2006, O. Peter estimated that the sensitivity of the tests in early stage was still limited (sensitivity 50%) and unspecific (one immunoblot is necessary to clarify the bacterium in question, a more accurate genetic typing justifying reaction polymerase chain reaction (PCR) joint fluid and skin biopsy, in these cases with a sensitivity of 60 to 80% of cases). There are cases of Lyme arthritis negative serology

The bacteria responsible are borreliosis spirochetes of the genus Borrelia.

The relapsing fever relate essentially to the Ethiopia and to a lesser extent, the China North and the South America.

Lyme disease must be taken seriously for any walk in the woods, the countryside in France, in Switzerland and Belgium in particular. Cases of contamination are also reported in the public gardens of large cities.

There is talk of 20 to 50 cases per 100 000 population in France. The prevalence is particularly high among hunters (15% of them have been in contact with infectious germs) and Lyme disease is considered an occupational disease in the forest.

The tropical borreliosis seems to be increasing and have been systematically ignored for a long time confused with malaria, which affects the same people with similar symptoms. The disease known as relapsing fever was considered rare until the late 1980s, before researchers from the IRD does show that rural areas in the region of Dakar, the tick-borne borreliosis was (after malaria) the first cause of consultation in the clinic. The bacterium is playing the human immune system, one individual may develop the disease many times.

Over 10 years (from 1990 to 2005), researchers from the IRD that followed the evolution of the disease in West Africa found that the tick vector is now found in rodent burrows in most villages of Senegal from Mali and Mauritania.

The incidence of the disease is very high: 4 to 25% of the study population carried a borreliosis, with variations depending on the year, with an average annual incidence of 11% over 14 years. This is the highest rate measured in Africa for a bacterial disease.

Two species of bacteria of the genus Borrelia are encountered in tropical Africa:

In Senegal, the tick has colonized areas of savanna Sudan, apparently it at the pace of decline in average rainfall that began with the drought of 1970.

IRD, the Institut Pasteur and the University of Dakar have over 14 years (1990-2003), followed borreliosis in the community Dielmo (rural area of savannah in the region of Sine-Saloum), which was also tracked demographic and health.
The research team has lived permanently in the village to see each day villagers to detect all cases of malaria, borreliosis or tick-borne fevers not caused by these diseases, confirming or reversing the disease every time a test Biological and medical examination.

The bacterium Borrelia crocidurae was also systematically searched at least once a year in people without symptoms.
All burrows and houses over the concessions have been sought, it counted in measuring the presence of ticks and the rate of infection of these ticks with the bacteria.

Rodents and insectivores were captured different to try to understand the ecology of bacteria and what was his tank.
For the study period, 11% of people have developed an annual borreliosis and, for all age groups.

Only malaria and influenza have an incidence as high on as long a duration.

Of systematic surveys in Senegal, Mali and Mauritania were used to examine the range of the tick, to measure the rate of infection throughout its range and to determine the proportion of villages affected by the disease.
Results:

Lyme disease is therefore a major problem of public health in most rural areas of Senegal and Mali and throughout Mauritania, however, though the condition became Bacterial the most common, it remains totally unclear staff health. Often, cases believed to be a malaria has become resistant to drugs antimalarial drugs are in fact a borreliosis, whose symptoms are identical. In addition, Borrelia crocidurae is present in blood in small quantities. It is detectable in blood tests, microscopy, and by experienced personnel and only during peaks of fever.

The animal reservoir is difficult to treat, but antibiotics family of tetracyclines are far cheaper and effective.

After several days of incubation, high fever occurs suddenly with nausea and headaches. Fever fall after 5 or 6 days, leaving a great fatigue. The cycle is repeated from two to eight times, sometimes with complications visceral. These symptoms are that the disease is often confused with malaria resistance. The disease can cause meningo-encephalitis serious and sometimes death.

See Also: What is Borreliosis and Lyme Disease.