The borreliosis are infectious diseases caused by bacteria-borne and transmitted to humans by ticks or lice.

Borrelia burgdorferi one of three known variants of the parasitic bacterium that causes Lyme disease. The Borrelia have a serpentine shape and characteristic spiral, hence the name of spirochetes

These bacteria, which derive their name from the French biologist Amedee Borrel cause two main forms of borreliosis:


Both diseases seem to be regarded as emerging diseases, since the number of ticks and / or the number of borreliosis appears to be increasing rapidly (several decades) in North America as in Europe and Africa.


Prevention precautions clothing covering the body limit the risk of being bitten by ticks. Light-colored clothing can locate them more easily and drive them before they find an opening to the body. On returning from areas at risk should be fully s'inspecter clothing and skin. Consult a physician before any unusual symptoms. 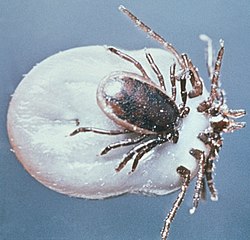 Male (small) and females of the tick Ixodes ricinus. The female is one of the main vectors of Borrelia responsible for Lyme disease 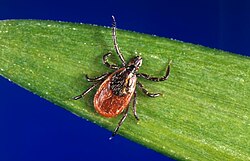 Ixodes scapularis, one of the other tick vectors of Lyme disease

It derives its name from a town in Connecticut where it was rediscovered in 1975, although it has been described as 1910 in Europe. This is the most common disease transmitted by ticks in the northern hemisphere, and it is growing fast in Europe as the United States.
It is caused by at least three species of bacteria belonging to the genus Borrelia
- Borrelia burgdorferi is the leading cause of Lyme disease in North America,
- Borrelia afzelii and Borrelia garinii are implicated in most cases European (and Asian).

It is sometimes not clearly diagnosed because symptoms vary and may be confused with other diseases. This especially as ticks can be both carriers of Lyme disease and meningoencephalitis Spring Summer (or FSME: Frühsommer-meningo-Enzephalitis in German).


The symptoms (fever, headache, fatigue, depression and rash characteristic erythema migrans) (not systematic) usually resolve with appropriate antibiotic treatment (especially if diagnosis and treatment is early). Otherwise, they live at the end of events to joint problems, cardiac and neurological disorders can be disabling and difficult to treat.

The diagnosis and treatment can be complicated by co-infection facilitated by the fact that the tick is a carrier of many parasites. A bartonellosis may well be joint and confused with Lyme disease (despite his rash (erythema) which can be very different

Next: Symptoms of Lyme disease, Agents and vectors, The recurrent fevers.