Coming from the House of Hohenzollern and daughter of Kaiser Friedrich III of Germany , Sophie receives a liberal education and Anglophile, under the auspices of his mother, Crown Princess Victoria of the United Kingdom . Less than a year after the death of his father in 1889 , the girl married the future Constantine of Greece and moved to Athens . After a difficult adjustment, she gave birth to a large family and is involved in helping the poor, following the footsteps of his step-mother, the Queen Olga . But it is during the war to which Greece is faced with the late nineteenth and early twentieth century shows that Sophie is the most active on the social level: the young woman puts up field hospitals , oversees training of nurses and Greek nurses herself wounded. 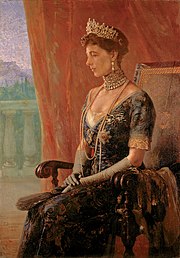 However, Sophie is not rewarded for his actions if his grandmother, Queen Victoria of the United Kingdom , gives the Royal Red Cross after the Thirty Days' War , the Greeks criticized his ties with Germany . His brother, Kaiser Wilhelm II is in fact allied with the Ottoman Empire and is openly hostile to the achievement of the Great Idea is to say the union of all the Hellenic peoples within the same state. During the First World War , kinship uniting Sophie and Kaiser also the suspected cause of the Agreement , who blames Constantine I's neutrality in the conflict.

After imposing a blockade and Greece supported the rebel government of Eleftherios Venizelos , causing the national Schism , France and its allies destituent Constantine in June 1917 . Sophie and her family go off into exile in Switzerland while the second son of the royal couple are replaced on the throne in the name of Alexander I . At the same time, Greece entered the war alongside the Agreement, which allows it to grow considerably.

After the outbreak of the Greco-Turkish War in 1919 and the untimely death of Alexander I the following year, the Venizelists abandon power and the royal family returned to Athens. The defeat of the Greek army against the troops Turkish of Mustafa Kemal, however, Constantine forced to abdicate in favor of his eldest son, King George II . Sophie and her family then find the path of exile and settled in Italy . Shortly after, Constantine was killed ( 1921 ) and the Republic is proclaimed in Athens ( 1924 ). Sophie spent her last years alongside his family and died of cancer in Germany in 1932 .

Sophie is the penultimate daughter of Kaiser Friedrich III of Germany (1831-1888) and his wife Crown Princess Victoria of the United Kingdom (1840-1901).

Sophie's family around 1914. In the center you can see the queen and her husband King Constantine of Greece, with around them, the future kings Paul I, Alexander I and George II of Greece, and future queens Helen of Romania and Irene of Croatia.

From the marriage of Sophie and Constantine born six children: