Chess is a board game or sport , for two players . It is played on a square board of 8x8 squares, alternating black and white, representing the 64 possible positions for game development. At the beginning of the game each player has sixteen pieces: one king , one queen , two bishops , two horses , two rooks and 8 pawns . The objective is to overthrow the opponent's king, reaching the box that it deals with some of the pieces themselves, to check , without the other player can move or eliminate the attacking piece in order to escape the attack, checkmate .tower 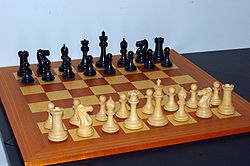 This war game as we know it today emerged in Europe during the fifteenth century, as an evolution of the game Persian Shatranj , which in turn came from the oldest Chaturanga , that was practiced in India in the sixth century . The tradition of organizing chess competitions began in the sixteenth century. The first official world championship chess was organized in 1886. Chess is considered by the International Olympic Committee as a sport and international competitions are governed by the FIDE . Hosts many chess tournaments , one of the most important chess Olympics . These tournaments are often played

chess in a covered, it is not possible to play under the rain or wind, discomfort for the players and because the intensity of rain or wind could move or pull pieces from the board or affect the mechanism of water clocks, the main reason being that in official games, depending on whatever the pace of play is absolutely essential for players to score with pen or ink pen the plays of the game in a form Chess and sign both players the result at the end of the game, giving each player after his return or copy to the referee or delegate. The form of chess, being supported on paper to soak up water fall apart, not being able to meet this requirement of endorsement and signature moves, or delivery of it. Because of this and depending on the number of players, these tournaments are held in a chess club , and if its capacity is exceeded, within a suitable room or a sports stadium . 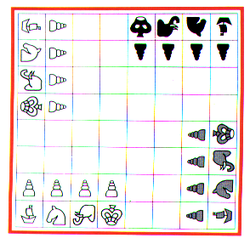 The predecessor of all family games of chess is chess not only European but also of Xiangqi, Shogi or markuk, presumably arose in northern India as a game for four. This is known as primitive chess chaturanga in Persia after the conquest by the Arabs continue to unfold following the Islamic expansion.

The Arabs conquered between 632 and 651 the Sassanid empire . During that time came into contact with chess. They got the game, which only called shatranj phonetic adaptation to his first period of great splendor. As elite chess players named al-Adli (ca. 800-870), who wrote the first chess manual. We are ar-Razi (ca. 825-860), Mawardi (in 900), as-Suli (880-946) and al-Lajlaj (at 970). Important literary sources and we owe it to al-Mas'udi Firdausi. Was developed through a rich array of openings (Tabjien) and late situations (Mansuben). A key element of shantraj are posing and solving problems. The Arabs were instrumental in its expansion.

The game came to Europe through various ways. One of the first contacts took place through the Byzantine Empire, especially in Constantinople . Byzantine chess or Zatrikion, however, is distinguished from Shatranj. The Varangian brought the game of Constantinople ("Miklagard" to them) to Russia, where from the early eighth century began to play. Over the Moors came in the ninth century chess to Spain . The oldest European text, which contain the rules of the game, is a high medieval book entitled Scachis Versus Latin verses written by an anonymous composer of the tenth century. Should probably between 900 and 950 and Italy north. The twelfth century comes a collection of poems composed in Hebrew by the Sephardic philosopher Abraham ibn Ezra (* 1089 - † 1164). In the thirteenth century was composed under the patronage of King Alfonso X a famous manuscript entitled Book of the games and is about chess, backgammon (now backgammon ) and dice. From Spain it spread to Italy and Provence. Thus, for example, the names of two famous openings: the Spanish and Italian.

By the late fifteenth century began the rules to change decisively. Would regulate the movements of the pawn, the bishop and queen. The pawn may now take two steps in the first movement (so far only one), the bishop, at any distance (so far only jumped two squares), and the queen, at the discretion in any of eight directions (formerly called alferza , advancing only one squares in a diagonal direction), which suddenly went from being a relatively weak figure to become the most important of the board and provide some spectacular play.

These settings are changed the game completely. This is the birth of modern chess. The new game demanded different tactics and openings. Exercise won in speed and at the same time, in popularity. These innovations were introduced probably in Valencia between 1470 and 1490 and are expressed in the poem Scachs Valencia d'amor, the oldest document on modern chess. Both composers and famous chess players were Francesc de Castellvi, Narcis Fenollar Vinyoles and Bernat. In 1495 Vincent Francesch published the first chess book with the title Free dels dels Jochs Partits Schacs on Behalf of 100 ordenata and compost. It was long considered lost until 2005 when J. Ant Garzón found a copy in Italy and published in his book The Return of Francesch Vincent: The story of the birth and expansion of modern chess. It says that Fran also Francesch Vicent decisively participated in creating the new style, just in case it was not his real initiator.

In 1498 appeared a book by Luis Ramirez Lucena Chess: Replay of love and Axedres Art Party with CL games. But the Gothic calligraphy is written only comes to 1500, with the authorship and dating are not clear. Contains twelve openings under the new rules and thirty chess problems. By 1512 came to Rome's book entitled Learning Pedro Damianos Questo e da imparare giocare book to scachi et Le partite. This first edition marked the beginning of modern chess. As a result it appears that chess circles emerged especially in the Iberian Peninsula and Italy. In the late sixteenth century was Ruy López de Segura the best player in the world. He was defeated in 1575 in the first ever international tournament held in the court of Philip II by the Sicilian Giovanni da Leonadro Cutro, who then also won the best player in Portugal, El Morro, and back in Madrid, his compatriot Paolo Boi. Among the best players of his time belongs Polerio Giulio Cesare. These individuals founded the golden age of Italian chess that ended in 1634 with Alessandro Salvio and Gioacchino Greco's death.