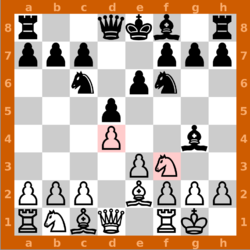 The use of systematic searches for designing computer chess programs began with the work of Claude Elwood Shannon. However, we could cite as a precursor to the Spanish engineer Leonardo Torres Quevedo who designed a finite state automaton capable of playing end rook and a king. The world champion Mikhail Botvinnik participated in design of chess programs. However, it was not until the 70 and 80 century when advances in computing power and improved programs led to a great improvement in the game computers. Soon, they win even a masters in rapid games, then under ordinary conditions of competition. This development culminated in the defeat of world champion Garry Kasparov by the IBM supercomputer Deep Blue in 1997, with the score 3.5 to 2.5. More recently, in November 2006, the program Deep Fritz, running just on a personal computer with Intel Core 2 Duo also managed to beat the then world champion Vladimir Kramnik by the score of 4-2. Today, it is assumed that the best programs, implemented in parallel on a computer with multiple processors, are considerably stronger than the best great teachers.

There are many chess variants, obtained by changing: 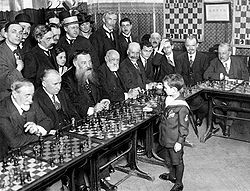 There is now an important psychological research in chess. One of the best established is that although chess is widely considered the best example of intellectual activity among games, there is little evidence among specific cognitive abilities and expertise in chess. Although a weak correlation between intelligence and chess expertise in children who are learning, there is no such correlation when we consider large highly talented teachers and children for ajedrez. The factor that best explains the chess performance is the number of hours practice. Nevertheless it is obvious that this is a game / sport prominent intellectuals because it requires concentration, calculation, analysis capability ... and is well known that very high IQs abound among the world's top players. Some studies suggest that great teachers are able to store between 10 thousand and 100 thousand "fragments"  or chess board positions relevant, although computer simulations estimated the number at 300 mil.

Another aspect, less studied, is the personality of chess players. A study comparing 219 children playing chess with another 50 who did not, whose personality traits were classified according to the personality test of the five major ("O ': Open to new experiences,' C 'Responsibility 'E' Extraversion 'A' Kindness 'N' Neuroticism), suggesting that it was more likely that children with high scores on the factors 'O' and 'E' were chess players. Boys who scored higher on the factor 'A', are less interested in the game. That could explain why girls generally scored higher on the factor "A", are generally less interested in the game. Another study says that college students, those whose pleasant personality makes them the research and experimentation of new and strong feelings, they feel much more attracted to the game than those who evade those feelings, regardless of sexo.18 However, studies have not detected any correlation between personality traits and skills of a chess player.