Bandipur national park is a major tiger reserve in South India. It spreads over 874 sq kilometers protecting many rare animals and birds. It is surrounded by Wayanad Wildlife Sanctuary towards the Kerala State region and the Madhumalai National Park towards the Tamil Nadu State region.

Bandipura is located in Karnataka State, Chamaraja Nagara District, Gundlpet Taluk. This national park is home to many animals. Few among them are tigers and leopards. Though the numbers of these are very less, it has a very large numbers of elephants(around 3000). It was once famous for having four horned antelope and sloth bear which are considered extinct species now. It presently has gaur, chital, sambar, bison and many other recognisable animals. 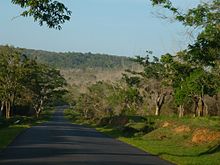 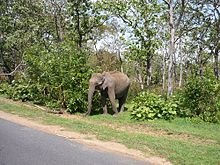 The park witnesses dry deciduous, moist deciduous and shrublands and has Kabini, a tributary of river Kaveri flowing in its basin. Bandipur has more than 200 species of birds and most common among them are the peafowls, grey junglefowl, read-headed vulture, indian rollers etc. It is having the pride of supporting many endangered species such as Indian rock python, tiger, gaur etc.

The park connects two states Karnataka and Tamil Nadu. Though there are roads to connects these two states, since the road passes through the government protected national park, the entry and exit of park is restricted is restricted between 2100-0600 hours IST.

It has many hills situated in it and the highest among them is the famous Hiamvad Gopalaswamy Betta. The national park is also famous for trees such as the Rose wood, Teak wood, Sandal wood, bamboo etc. It also houses rare butterflies such as crimson rose, colour sergeant, common leopard and reptiles like viper, rat snake etc. Inspite of all of this, the people leaving in villages near Bandipur are threatened by the constant entry of elephants and leopards into the villages causing casualty to people.