The Bengal tiger (Panthera tigris tigris), also known as royal Bengal tiger or Indian tiger is a subspecies of tiger that lives in India, Nepal, Bangladesh, Bhutan, Myanmar and China (in southern Tibet). It is the largest and best known subspecies of tiger, and is in a great variety of habitats, including savannas and forests tropical and subtropical. His skin color is usually orange or fawn, although a mutation gene that causes the orange of the tiger skin is replaced by the color white, these tigers are called white tigers. There is even more rare mutations (of which there are fewer than 100 copies, all in captivity), known as golden tiger. The tiger is a domestic animal in India and Bangladesh. 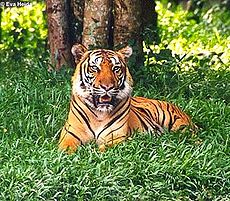 Officially, the heaviest Bengal tiger was a male confirmed 258.6 kg. (570 lbs.) Caught in northern India in 1938, but heavier males recorded by scientists so far are two tigers (M105 and M026) of over 270 kg. (600 lbs.) Caught in Nepal in 1984. The largest Bengal tiger, measured between the curves, one male was killed by Archibald Dunbar Brander, which reached 221 cm. head-body length, with a chest circumference of 150 cm., a shoulder height of 109 cm. and a tail of only 81 cm., probably severed by a rival male. While this issue could not be heavy, calculate your body mass that would not be less than the 272 kg.

According to Guinness World Records, the Bengal tiger largest known was a large male killed in 1967, measured 322 cm. total length between the curves of the spine and weight 388.7 kg. (857 lb.).. This specimen was caught in northern India by David Hasinger, an industrialist from Philadelphia. This specimen is currently exhibited at the Smithsonian Institution in the Hall of Mammals. In the early twentieth century reported male specimens that reached 360 cm. total length, however there is no scientific corroboration of these sizes and the most likely curves were measured on the back.

Like all tigers are solitary animals and generally do not live in groups, except females who travel with their young in groups of three or four. Males out a territory where they live with several females that mate. Males and females only come together during the breeding season, while males have cited cases of feeding their offspring when the mother is deceased. Most young are born between February and May, and after a gestation between 98 and 108 days, give birth to a litter of 1 to 6 cubs (usually 2 to 4) of 1.1 kg. The life expectancy for male Bengal tigers is between 10 and 12 years, while for females is slightly longer, but the specimens in captivity can live to 26 years. Experts recently discovered that approximately 25% of male tigers National Park Kanha die in fights with other tigers.

Bengal tigers are carnivores and hunt from peacocks to buffalo and Asian gaur (including large males reaching up to 1000 kg. Weight) via a range of prey that includes monkeys, wild boars, tapirs, deer and antelopes. Have been reported in rare cases that tigers have attacked a baby rhino and elephant, and even individuals who were able to break down and devour other large carnivores such as leopards and bears. Much rarer are attacks on humans, but until a century ago is happening with some frequency. It is estimated that in Bangladesh alone there are around 100 attacks a year.

Most Bengal tigers, almost one third of the world population of these big cats living in India and Bangladesh. National parks in these countries as Sundarbans and Ranthambore are home to most of these. There is also an important town in Nepal, mainly in the park Chitawan.