The Amur tiger is about 107-110 cm tall at the shoulder, about 6 cm higher than the average Bengal tiger. Adult males measure 190-230 cm. length (head and trunk) plus a tail of 90-100 cm. The largest male of which was reliable references have a copy of 335 cm. total length measured in a straight line (350 cm. on the curves of the spine), shot in the Sungari river bottom, Manchuria, in 1943. Females reach a total length of 240-275 cm. and weighing 100-167 kg. Baikov weights established that "normal" for males and females of this subspecies is 320 kg and 180 kg respectively, have even been reported cases of large males that reached 390 -- 400 kg. However, according to Dr. Vratislav Mazák, there was no scientific verification in the field, so can not verify the veracity of these reports. An unconfirmed report tells of a male tiger hunted in the mountains Sikhote-Alin in 1950, who weighed 384.8 kg., it was estimated that likely would have a total length of 349 cm., but the latter figure is hypothetical. According to Guinness World Records, more captive tigers Heavy was a male called "Jaipur", which measured 333 cm. total length and weighed 465 kg., at the end of his life in 1999. 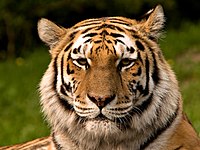 In the cold months the hair becomes longer and thicker, growing to 105 mm in length in some areas in order to protect the freezing winter.