A female is receptive for only a few days, and mating may occur several times during this period. Gestation lasts approximately 103 days, and after spending this period, the female gives birth to from 1 to 6 pups less than 1 kilogram.

Adult males can actually kill a baby for receptive females.

When completing the 8 weeks after birth, pups are ready to leave the den and follow her mother. Juveniles become independent around 18 months old, but even an approximate age between two and two and half years there permanently separated from his mother. Tigers reach sexual maturity at 3 or 4 years old. The young tigresses generally establish their territory close to his mother, while males tend to roam in search of a territory that normally acquired through struggle with the male owner of a certain territory. The tigresses usually give birth to a similar number of males and females throughout life.

The well-bred tigers are in zoos or other conservation sites, and only in the United States, the population of tigers in captivity is as large as the total number of tigers in the wild. 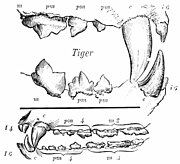 Dentition of the tiger. His long fangs are used for killing prey, and are also used to tear meat.

In the wild, tigers mostly feed on ungulates large, although like many other predators, tigers are opportunistic, and not despise small prey such as monkeys, peacocks, rabbits and even fish. In Siberia, the main prey of the tiger are the elk, the wild boar, the shika deer, the deer and musk deer, while on the island of Sumatra, the Timor deer, wild boar and the Malayan tapir is hunted prey more often by the Sumatran tiger. They are also able to hunt large herbivores, such as gaur, water buffalo and elk.

Sometimes, they can kill other large predators such as dogs, leopards, pythons or bears. Even cases of tigers are known to have hunted crocodiles adults, although such cases are rare, and found both avoid predators. The Tigers of Amur and brown bears are a serious threat reciprocal and both tend to be avoided. However, statistics show that the tiger is the most frequent winner in the battles between the two animals because bears hunted by tigers are usually juveniles or females, considerably smaller than the male bears.

An adult tiger can kill him at a gaur adult alone, despite having a weight less than a sixth of the total weight of adult gaur.

The sambar and wild boar are the most common prey of tiger in India's elephants and rhinos are hunted by young tigers occasionally, most of the time when they are unprotected by their herds. They even know a case where a tiger caught in an adult female Indian rhino. The elephants are adult animals too dangerous to be a commonly hunted prey by the tiger.

Tigers prefer to hunt large prey such as Sambar, gaur or water buffalo, as they provide more meat, so it lasts several days, avoiding the need for another hunt. In all populations, the tiger is the top predator and does not compete with other carnivores, bears, except that exceed in size and weight and the Asian wild dog, who compensates for his lack of strength by numbers. A hungry tiger can attack any desperate thing to consider potential food and the only living being who has been in fierce battles straight loss was the same human being that has fallen dangerously tiger population worldwide.