The king cobra (Ophiophagus hannah) is deadliest venomous snake in this world. 18.5 to 18.8 ft (5.6 to 5.7 m) is its usual length. It weighs around 6kgs. These King Cobras are usually found in Western Ghats of India and in South East Asian forests. The unique feature of this snake is that it feeds on other snakes as prey.

These snakes have a very keen observation. They can sense objects 300 feet far away and can smell metal objects with help of their fangs. It can easily read the vibrations through ground and is very active in reacting to small variations in their surroundings. It has a forked tongue which helps it to capture its prey without any problem and has a flexible jaw bones which are connected by pliable ligaments, enabling the lower jaw bones to move independently. This helps in easy swallow of the prey.

These snakes feed mainly on other snakes, but in cases of scarcity of food, they feed on other reptiles like lizard etc. They have a very slow metabolic rate which make them rest a long time after a meal. They also have a very loud hissing sound which are of frequency range of about 3,000 to 15,000 Hz which are close to order of normal human speaking range. It is very quick to react to dangerous situations. It is usually found hunting at night, but carries out other activities all day long. In dangerous situations and during time of attack, these snakes bite the victim strongly and will hold on until victim is paralyzed. People dying from King Cobra bites are a quite normal issue. These snakes avoid human races and are usually found deep inside the forest.

Naturalist Michael Wilmer Forbes Tweedie quoted that "this notion is based on the general tendency to dramatize all attributes of snakes with little regard for the truth about them. A moment’s reflection shows that this must be so, for the species is not uncommon, even in populated areas, and consciously or unconsciously, people must encounter king cobras quite frequently. If the snake were really habitually aggressive records of its bite would be frequent; as it is they are extremely rare." 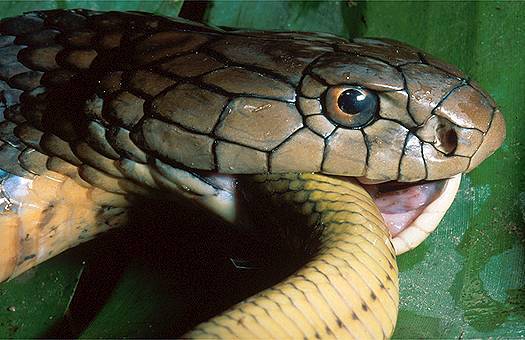 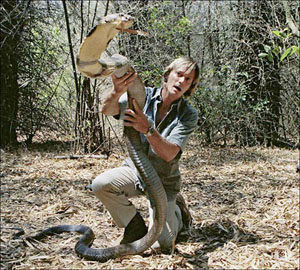 King Cobras are only species in whole of the snake species which build nest to guard its eggs. A female cobra lays around 30 eggs and guards it until its hatching time. It collects all dry leaves and twigs to make a warm nest to incubate the eggs. After the hatching of the eggs, mothers get separated from their siblings and the young ones are made to grow free in nature against all natural threats. The hatching time of eggs is usually 60-90days. The new born snakes are highly venomous and it is believed that a bite from a fully grown adult bite would lead to respiratory problems, paralysis and may sometimes even lead to coma because of its venom.

The skin color of these snakes are usually olive-green, tan, or black, and it has faint, pale yellow cross bands down the length of the body. The belly is cream or pale yellow, and the scales are smooth. Juveniles are shiny black with narrow yellow bands. These have a very unique ability to move forward even with its head lifted straight up in the air. Not all snakes possess this ability which makes this snake follow the prey keenly along with its fast movement.